England’s Justin Rose was pipped by Spain’s Sergio Garcia in a sudden-death play-off at the recent Masters in Augusta. This near-win highlights his position as one of the top players in the world today. His outstanding career to date has now been recognised by England Golf, which presented him with a Lifetime Achievement Award at the recent England Golf Awards 2017, held 16 March at a glittering ceremony at Lord’s and hosted by TV personality Di Dougherty. Special EFX designed and manufactured the coveted trophies. Danny Willett was named Player of the Year.

Rose’s eloquent videoed acceptance speech paid tribute to the support that England Golf provided him in the early days of his career. Whilst listing winning the US Open as the highlight of his career to date, taking the gold medal for Great Britain at the Rio de Janeiro Olympics was clearly a triumph of which he was particularly proud.

The England Golf Awards applaud the achievements of not only the world famous players such as Rose and Willett but similarly those who play at club and county level. Winners named on the night included Bronte Law of Cheshire, honoured as Women’s Player of the Year, Charley Hull picked up the Spotlight Award, Club Coach of the Year went to Ben Knight at Chartham Park Golf Club and Jenny Davies of Bondhay Golf Club was named The Volunteer of the Year for all her work encouraging juniors and their parents to play golf. 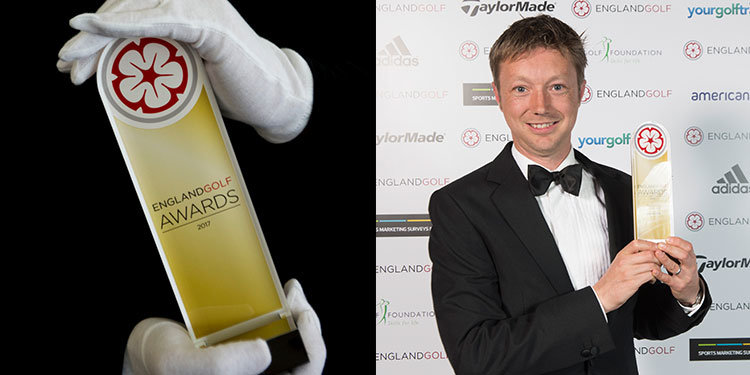 Special EFX produced the golf trophies in clear acrylic and decorated in gold and blue. The England Golf rose emblem crowns each trophy, which were individually printed with the winners’ names and supplied with a dazzling finish. Special EFX delivered the trophies complete with protective gloves so as to ensure they looked pristine at the presentation ceremony.

England Golf commented: “We had outstanding service from Special EFX who came up with some great ideas to create perfect trophies for the winners of the England Golf Awards. We wanted lasting mementoes which reminded everyone of a modern and prestigious event and the trophies helped us to achieve that. I’m sure our winners will display them proudly”.