When is a Cup a Trophy?

Hej Coffee loves to excel at making a fabulous cup of coffee and creating cafés with a friendly vibe. The company has more than thirty such venues in the South East, including community and workplace cafés. Its barista skills are key to its popularity, so much so that Hej approached Special EFX to commission a Cup of Excellence. The company wanted an exclusive trophy, to honour the work of its baristas and encourage world-class standards throughout its cafés.

It must be said, that Hej’s top secret, 100-year-old espresso recipe, Carnival Blend, is another reason coffee devotees love Hej. It evidently tastes of caramel with a hint of stewed fruit and when milk is added the combination of sweet and sour is heaven! 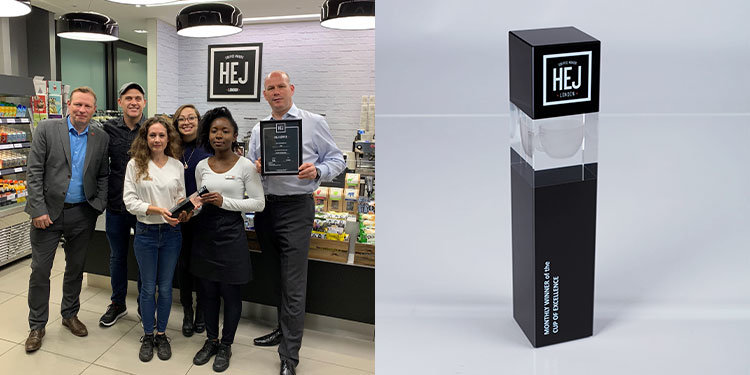 The Special EFX studio has created an ingenious trophy design, featuring a miniaturised replica of a Hej coffee cup, within the trophy. The cup is engraved as a three-dimensional design inside a crystal cube, which is mounted on a contrasting black onyx crystal tower. The resulting trophy is as intriguing as it is impressive and the client loves it: “I couldn’t be happier with the way the trophy has turned out. They have taken our trademark coffee cup and turned it into a piece of art”.

The Hej Cup of Excellence is to be awarded monthly. The inaugural winner is the RA-Food team of baristas, who serve freshly brewed coffee at AON plc. How lucky are the staff at AON to have the best coffee-makers around!