Culture and the arts have taken a back-seat during 2020, as the pandemic has devastated the plethora of live performances normally enjoyed across the UK. However, Ian McKellen, the celebrated actor, prefers to think positively. As winner of the Outstanding Achievement Award at the recent 2020 South Bank Sky Arts Awards, he took to the stage at the virtual event and reflected on history.

“I am very happy and honoured to be in the company of the nominees for this tricky year’s South Bank Sky Arts Awards…The closure of theatres in response to an outside threat to the country, is not unprecedented. When another plague reached London 450 years ago, the theatres were closed and Shakespeare’s company was out of work. No furlough. His response to one lockdown was to write Macbeth, Antony & Cleopatra and King Lear. I hope during our lockdowns that playwrights have been busy writing plays. More, I hope others have been planning and imagining future productions.” 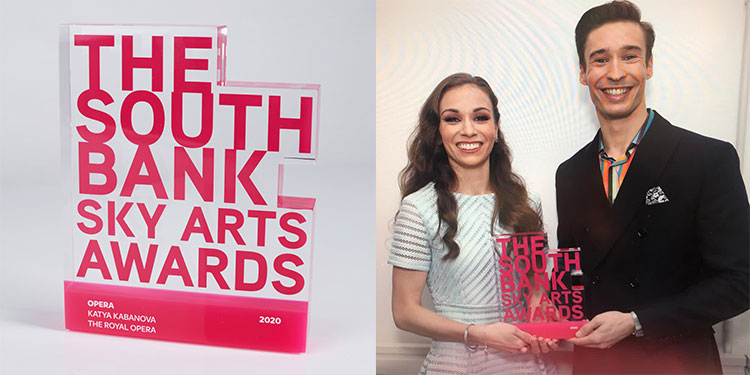 EFX created the exclusive trophies for this the 24th South Bank Sky Arts Awards. Standing on a magenta-coloured plinth, the trophies are made from cast, clear acrylic and printed to match the event’s logo. The production team and award winners were reported to be delighted with the trophies: “They are both beautiful to look at and easy to hold, and as they are made from acrylic are impressively robust and sturdy”.

The Awards recognise all genres of the arts from Dance to Comedy, Literature to Visual Art.  Ian McKellen was announced as one of the twelve distinguished Award winners at the ceremony hosted by Melvyn Bragg. The celebrated 2020 winners also included the Sheffield Crucible, which took the Theatre Award for its production of Standing at the  Sky’s Edge, the TV Drama Award went to Chernobyl , whilst Waad al-Kateab, the Syrian journalist, filmmaker and activist was recognised with The Times Breakthrough Award.