Work on the ABB FIA Formula E Championship’s new commission started back in December 2017. Six months later, we shipped the trophies to New York for the Season 4 finale.  Looking back, I think it was a moment of elation– we’d done it.  I knew we’d surpassed my own expectations and, more importantly, we had surpassed what we had promised Formula E.  I was so proud of the complete EFX team.

I was lucky to be involved from the very outset in the project of creating the new Formula E trophies. It was a fascinating experience to work with the young product design graduates at Central Saint Martins and to advise on the manufacturing potential of all the submitted designs. Steve (Aspinall), Head of Design at Formula E was clear – he wanted the exceptional. For the students, he was a complete inspiration and a window into the commercial world of delivering brand values on a global stage. I loved the whole experience. 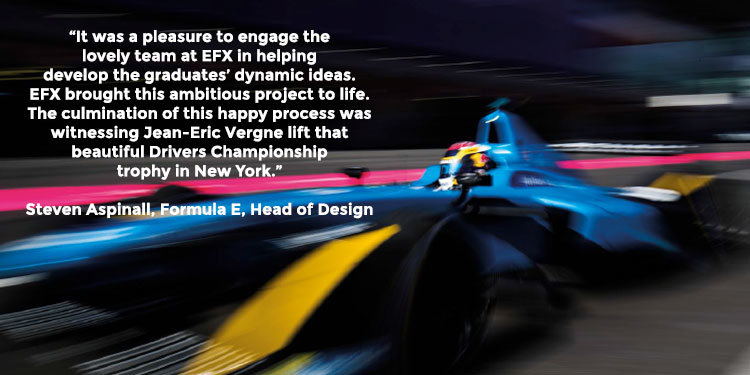 The brief for the product design graduates was to interpret the Formula E brand and to capture the essence and thrill of pure electric racing in an exciting, urban environment.

Ultimately, the entries were whittled down and four graduates were asked to present their concepts and prototypes before the judging panel. It was fascinating to get an insight into their thinking and I respected their refreshing approach.

In January 2018, the winners were selected. The design of Ellen Nyqvist was chosen as the perpetual trophy for each season’s winning driver and that of Sarunas Plyskaitis for the individual podium finishers in Season 5 and also for this season’s winning team. Steven Aspinall, Head of Design at Formula E and former student at Central Saint Martins, said: “To collaborate with a world-renowned creative institution like Central Saint Martins was an honour. The creativity of the graduates and their interpretation of our brand was refreshing to see. We wanted to create championship trophies that would be uniquely Formula E. Ellen and Sarunas have delivered on this brief with dynamism, beauty and style.”

It was then up to the EFX design studio to engineer each design into a trophy that could be manufactured and would withstand the drama of a podium presentation and being sprayed with champagne. Ellen’s design also had to be suitable for manufacture in a scaled-down format for each season’s winner to keep.

Ellen’s original, beautiful concept featured layered glass to depict the top seven racing circuits as voted for by fans. Given the fragility of glass and the fact the trophy is to travel the world and be presented each season for years to come, we recommended a specially cast, translucent blue acrylic instead of the glass.  Each circuit then had to be meticulously profiled, precision-cut and a means devised to maintain their consistent alignment, involving 14 gold plated raisers.  The studio came up with a multi-layered base design, which addressed the challenges of slotting the circuits together and counterbalancing the forward weight of the trophy, whilst respecting Ellen’s original design. 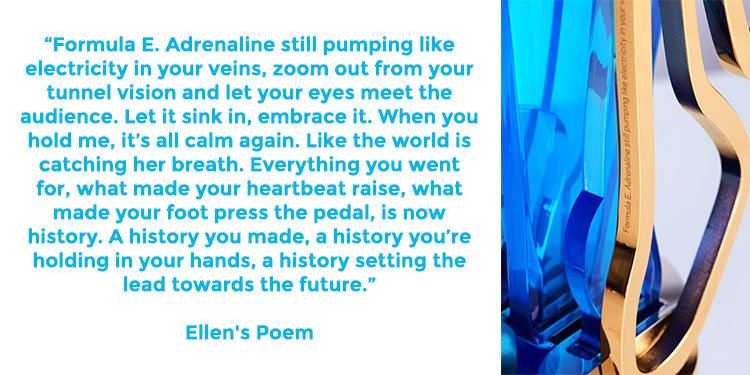 Spins and Slides Along the Way

Yes, there were many challenges along the way, especially when we realised that the front, 24kt gold plated Berlin circuit would not fit onto any of our four laser engraving machines. How were we to engrave Ellen’s poem onto the fine, 10mm wide circuit? After much head-scratching and various trials, sandblasting proved to be the optimum solution.

Ellen’s drivers’ championship trophy speaks with the heart and is truly stunning – I applaud her foresight and talent.

Saruna’s design is inspired by the ‘e’ of Formula E – it has a powerful impact both from the side and from overhead, which is highly unusual.  It is vast, standing 500mm tall and we always knew that maintaining a consistent curve was going to be an issue. Initially, the design was to be made in aluminium. However, even though we have five-axis machining facilities, it was not possible to achieve the consistency of profile we demanded and instead we recommended making the logo profile in three sections, producing moulds and then casting the trophies in polyurethane. A bespoke locking system is hidden within each trophy to maintain the integrity of the conical logo ‘e’ design.

For the launch of these designs the chosen finish was satin gold, which really takes your breath away.

At times I sensed we were attempting the impossible but the team working on the project at our works in Ettington were just amazing. The impossible became reality.