Over 2,000 students and music fans congregated at Warwick Arts Centre for a weekend of brass band playing, in February. Music-making at its best − fun and very loud! The annual University Brass Championship is thriving; this year 19 ensembles took part from universities around the UK. The competition aims to adapt the traditional brass band culture for the youngsters of today and the enthusiasm and fancy dress compensated for any wobbly notes.

The competition took place 20-21 February at Warwick Arts Centre, on Warwick University’s Campus. The University of Manchester’s band, playing a blue-themed programme, was the ultimate winner of the sparkling, new trophy. The previous perpetual trophy had come to a premature and sticky end after just five years, thanks to raucous celebrations in many a bar involving large quantities of beer. 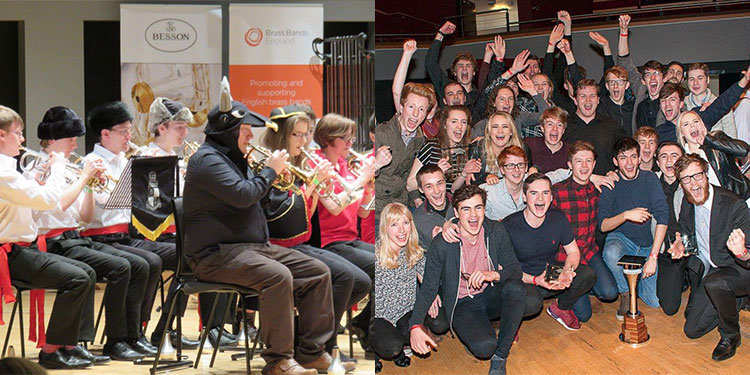 The design for the new winner’s cup was sketched out by Chemist, Warwick University student and cornet player, Alex Parker, who also helped to organise the event. The problems concerning beverages are neatly avoided: the trophy is in fact solid, manufactured by EFX in student-proof, nickel plated aluminium. The main section depicts a trumpet bell, beautifully engraved with snatches of music and capped with the competition’s logo of mortar board and tassel, seemingly floating above. Alex was delighted to find Special EFX, local to the university, and suitably skilled to turn his idea into reality. “I still can’t believe how well the design came together; EFX got right behind the project and did a fantastic job.”