A fortuitous meeting at the International Confex Show last year prompted the creation of these stylish trophies for the Equestrian Awards 2017. EFX exhibits at the show each year and the stand proved particularly eye-catching to the organiser of this year’s Awards. “When I saw EFX’s stand at the Event Production Show I was really intrigued at the range of trophies on show. They all looked so different to the standard award trophy (which we had been using for a few years) and were nicely personalised to each award ceremony. I had a chat and found out all about them, including the free design stage which was really appealing. So, when it came round to this year’s event, I suggested we try EFX, not only to save a bit of money but to help evolve our event.”

The trophies depict the outline of a horse’s head with flowing mane, skilfully pierced from solid aluminium and then nickel plated and mounted on a digitally printed plinth. As much works of art as trophies, they proved hugely popular: “We were delighted with the trophies, and in fact a few of our winners got in touch the next day to tell us how they had really enjoyed their night and how pleased they were with their trophies! We also really liked their relevance to the equestrian event and their high quality finish”. 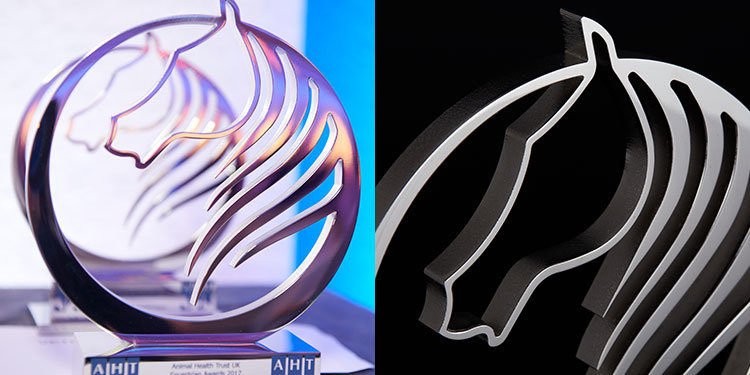 The Awards are in their 29th year and attract huge support from the equestrian community and raises considerable funds for the Trust’s work, including medical research and supporting equine athletes at the Olympic and Paralympic Games. This year the Awards were held at the London Marriott Hotel, Grosvenor Square, 31st October. The President of the Animal Health Trust UK, the charity which runs the Awards, is HRH the Princess Royal, who presented the trophies on the night.  Amongst the lucky winners of the stunning trophies were Oliver Fletcher (British Showjumping Award), Michel Assouline (Field Dressage Award) and Dr. Reginald Wooldridge (Veterinary Achievement Award).