The Inside Soap Awards 2018 have recently been announced. The glitzy event was held at restaurant and nightclub 100 Wardour Street in London’s West End, and saw the cream of the UK’s soap talent turn out for the big night. This year, Coronation Street took top spot, winning Best Soap and seven other awards, including Best Actor (Jack Shepherd as David Platt) and Best Exit (Shayne Ward as Aidan Connor).

However, readers of Inside Soap Magazine spread their favours around. Emma Atkins, playing Charity Dingle in Emmerdale, was voted Best Actress, Holby City won Best Drama Storyline for The Hospital Shooting, and EastEnders’ Danny Dyer and Kellie Bright won Best Partnership for their pairing as Linda and Mick Carter.

For anyone who is addicted and needs their daily ‘Soap’ fix, the Wikipedia summary of who has won which Inside Soap Award makes compulsive reading. It itemises a tally from 2001 up to and including 2018. EastEnders outstrips its rivals with a phenomenal 102 trophies, followed by Corrie on 80 and Emmerdale with some 46. 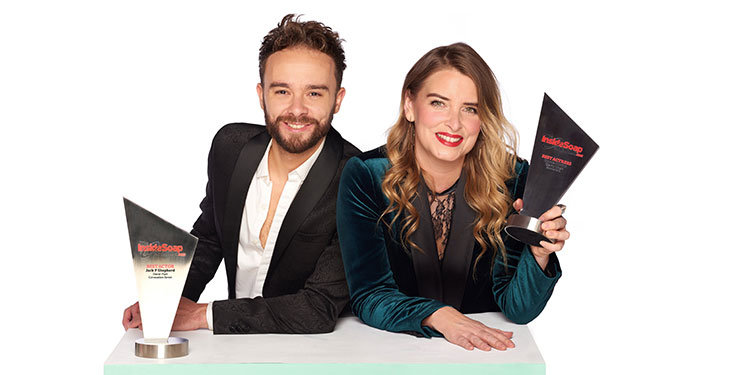 Special EFX has been producing the Inside Soap Awards since 2012. The current design stands 300mm tall and is made from solid aluminium, nickel plated and finished with a fashionable brushed effect. Full details of the winner and Award are digitally printed on the front. Amongst the winners this year is Danny Miller, who was feted with the title of Soap Superstar 2018 for his performance as Aaron Dingle in Emmerdale. Danny must have quite a collection of trophies, having won 3 previous Inside Soap Awards, in 2010, 2011 and 2017.

All photos by Inside Soap/Dan Goldsmith