Visit the offices of Graham Poole Road Transport in Rochdale and you will see in pride of place on Graham’s desk a trophy masquerading as his Great Western Star show truck. It is his pride and joy and he loves showing it off, despite having cabinets full of other trophies he has previously won at truck shows. His new trophy celebrates the 20th anniversary of the family-run company, but it nearly never got made.

Rachel Poole, daughter of Graham, who works in the business, and Operations Manager Wayne had been trawling the internet looking for a company that could make a model of the truck, without any success. They had resigned themselves to just having to purchase a trophy in the shape of a standard truck when they came across the EFX website and spotted some of the examples of amazing trophies EFX has made. They dashed off an email, enquiring if EFX could make a trophy looking like the Western Star. 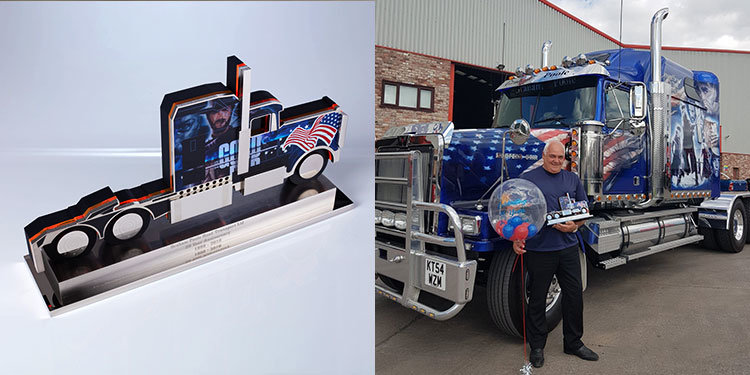 Shelley in the Sales office at EFX picked up the enquiry and made a bee-line for the studio. Rachel recalls: “Shelley telephoned me to tell me they could do it! She explained that not only would the trophy have the same profile as Dad’s real Western Star but it would also have all the graphics on it too – we got really excited”.

The trophy is manufactured from solid aluminium and then decorated using a number of different materials and techniques. Parts of it, including the perpendicular exhaust, are nickel plated and polished, the wheels and part of the chassis are black anodised, whilst lava orange acrylic discs embellish the side. However, it is the Clint Eastwood western themed graphics which proved the biggest challenge. 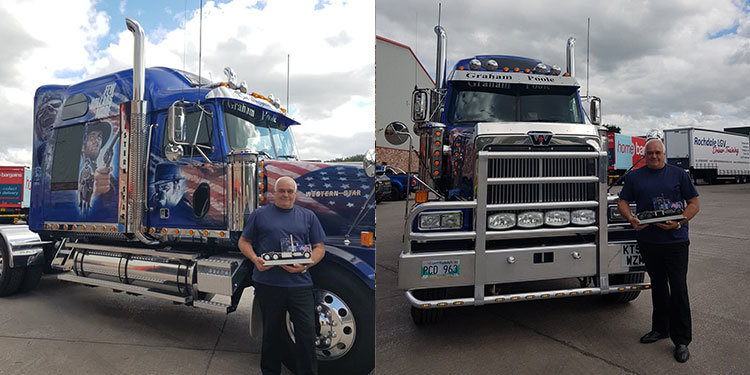 The truck is unique and the graphics were airbrushed directly onto the vehicle, so Tom in the EFX studio did likewise. He meticulously copied and miniaturised Clint to fit Graham’s trophy, creating the original artwork from scratch. Like Graham’s show truck, the trophy turns heads. “We were so excited to see the final result – it far exceeds our initial hopes and my Dad is more than impressed with it. On the night of the presentation he was asking loads of questions about how it had been made and who had done such a fantastic job.”